December 2004-January 2005
Tip of the Month
Backing up Digital Files in the Field-
You'll need more than you think! 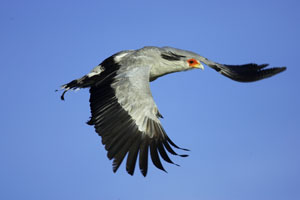 This is an uncropped, original image of a secretary bird in flight.
It was shot at a focal length of 1100+ mm. This shot was from a burst of about 9 frames,
with two real keepers, and two that were slightly misframed. My point?
With digital, Mary and I are shooting more, taking more chances as we
'go for it' without any worry about the expense of failure. The result?
Great images, but a lot of digital storage needs, too. As you'll see as you read on.

I write this just days after returning from almost 8 weeks in Kenya and Rwanda. I shot the entire trip on digital, using a Canon EOS 1Ds and a 1D Mark II, with file sizes of 11mp and 8.2mp respectively. Mary shot both film and digitally, but the lure and the advantages of shooting digitally had her shooting most of her work with her Mark II. We did two safaris to Kenya, and one 5 day mountain gorilla shoot in Rwanda, and among the participants 50% of our first Kenya safari, and 90% on our second Kenya safari, and 100% on the Rwanda trip shot digitally.

When I say 'backing up' I'm not refering to simply downloading your CF card to your computer or digital wallet. Backup specifically meaning creating a second copy so that if your initial downloaded copy should be lost, you have a second copy. For example, if you downloaded to your laptop, you have one copy. If you break your laptop -- if the drive crashes, anything, you risk losing your data. However, if you have a second copy, the images are safe -- unless something happens there, too! So, backing up is important.

On our recent Africa trips backup varied per shooter, but the important point I want to make is this: You will shoot more images digitally than you do with film, and storing the images can become a problem. Shooting more seems like a contradiction, since the LCD image and the histogram should eliminate the need for shooting dupes in camera, brackets, etc. However, the fact that you can shoot more, at no cost, makes digital far more attractive, and you will probably find that you're shooting more images, and trying new shots -- experimenting, 'going for it,' pushing the envelope -- because it is costing you nothing to try.

Certainly Mary and my experience confirm this, as we tried new shots, firing away with abandon, because we simply could. Our fellow shooters did the same, but therein lies the potential problem -- STORAGE.

Some of our shooters stored their images on digital wallets. Those few that shot jpegs had no problems since the jpeg file size was small enough that their 30 or 80 gig wallets never filled. RAW shooters produced larger files, and filled. The digital wallets used did not display RAW images on their preview screens, so as the wallets filled, and photographers began sweating whether or not they'd have enough storage, they were unable to edit out obvious errors, mistakes, or blank shots. Everything shot got down-loaded and stored, and their digital wallets filled.

Some shooters had intended to shoot jpegs but switched to a RAW file format when they learned most of the photographers were shooting RAW. This, too, presented problems, because they brought digital storage based upon smaller file sizes. Some had intended to write CDs as backup, but now, shooting RAW, they needed three times the number of CDs as they had expected, which was probably still to few for the amount of shooting they ended up doing!

Some photographers downloaded to their laptops, and then downloaded a second time to their digital wallets. In both cases there was real worry, because both began to fill, and although the laptop copies could be editted, and poor images deleted to create drive space, the wallet could not be editted and the backup storage devices were running out of room!

I carried FIVE different storage mediums. I downloaded to my laptop. Later, I copied either the uneditted file, or an editted file pruned via Capture One for sharpness, to an external hard drive. When I had time, I copied that same file, edited or unedited, to a series of DVDs. Eventually, since both Mary and I were both shooting digitally, I had to delete the original down-loaded files from my laptop, leaving me with just two copies -- the external hard drive and the DVDs.

I've never used the Flashtrak in the field -- I've 'used' it, but only to test it to make sure it was working and copying data. To me, the Flashtrak is my storage of last resort, and at 30 gb it really is 'last resort.' The portable external hard drive is a Lacie, that is designed for travel -- small, sturdy, plastic coated, rugged. Unfortunately, while my laptop recognized it when I tested everything here at Hoot Hollow, my laptop did not recognize it once I was in Africa! My backup storage was now down to Four!

The device I counted on most was my external hard drive, also a Lacie, of 250 gb. External HDs are not designed for travel, and I was worried that it might break. When traveling, I padded it as best I could, but still, on the rough, rough roads in Kenya I worried that vibrations were going to ruin the machine. They did not, and the Lacie worked fine, and my laptop recognized it every time I plugged it in.

My Dell laptop has a built-in DVD/CD writer, and sometimes, perhaps depending upon whether anything else was plugged into a USB port, the computer didn't recognize the DVD writer! Fortunately, by unplugging USB devices, restarting the computer, and heavy praying, I got the laptop to write DVDs and I had my second backup.

With plenty of DVDs and a 250 gb HD Mary and I had enough storage, but some of our participants almost ran out. Most of the digital shooters shot about 100 gb of images on their safari. If unedited, that's about 25 DVDs, 120 or more CDs, and more than a digital wallet or most laptops are capable of storing!

The point is this: Because it is fun, easy, and productive, you will probably shoot more images digitally than you ever did with film. For example, I've done so many safaris that with film I often shot only 2-3 rolls on an average game drive, sometimes for an entire day. Good days might result in 5-10 rolls, and really, really great days as many as 20 (a handful ever). Shooting digitally, I shot 2-4 gigs nearly every game-drive, which was the equivalent of about 10 rolls of film a day. Why? Because I could, and it didn't cost me a cent to shoot. But to store ... that's another issue, and one you will have to take into account. Plan ahead and save yourself a lot of anxiety --- you don't want to run out of backup space!